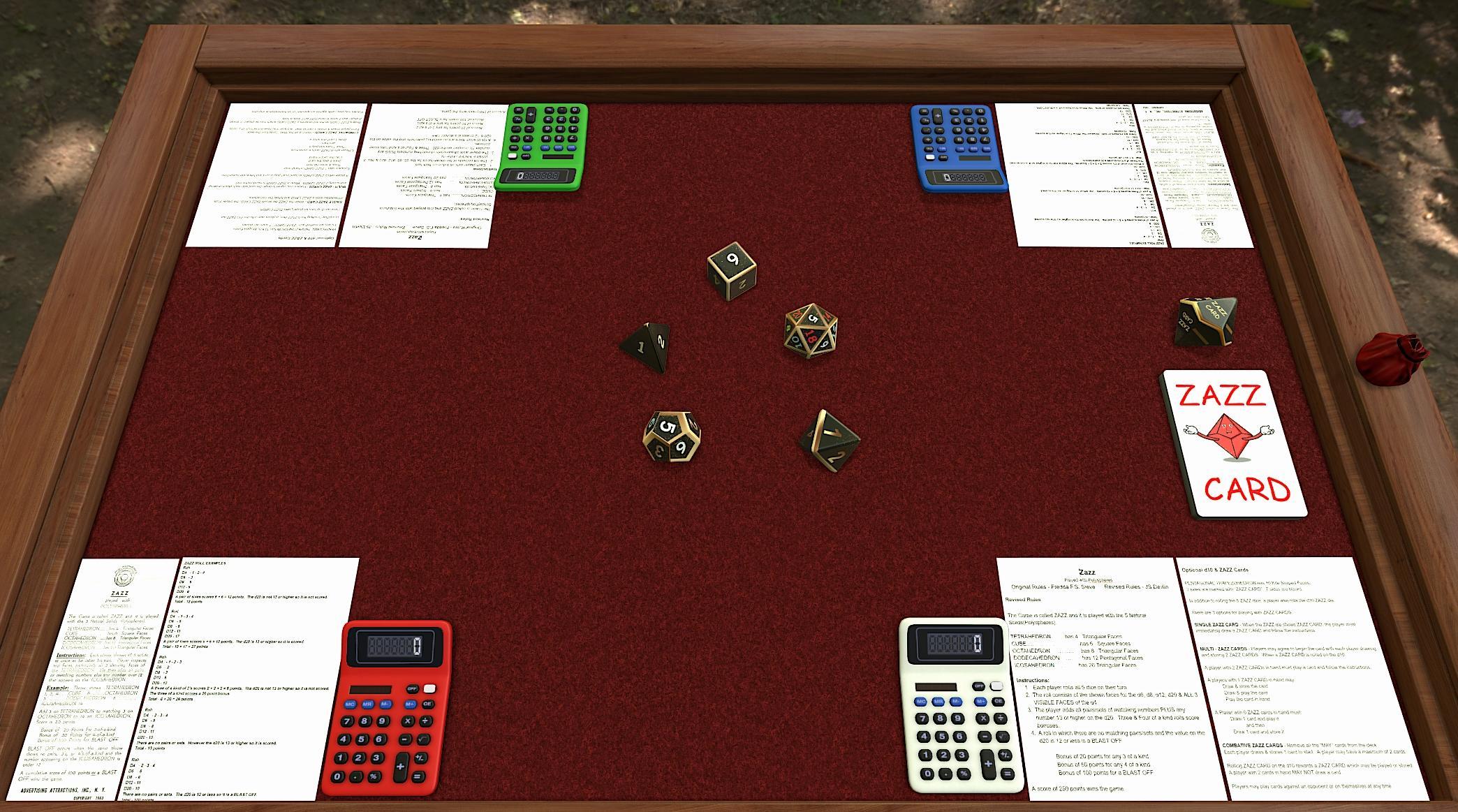 Play ZAZZ on Tabletop Simulator – The First Polyhedral Board Game

While doing the research in attempting to find out when each polyhedral die made its first appearance in a board game, I found evidence of a game, ZAZZ (1963), that used a full set of polyhedral 10 years before the first incarnation of Dungeons & Dragons.  And my attempt to name a Godfather of Polyhedral Dice was complete and utter nonsense; Partly because the three men I listed were all trumped by the designer of ZAZZ.  But mostly because the designer of ZAZZ, Fredda Sieve, was a woman.

The internet has uncovered only one version of ZAZZ.  It is probably true to say that only a very small handful of people have ever seen ZAZZ and fewer have played it.   Jon Peterson writes up the entire story of Fredda Sieve and ZAZZ in an excellent post Fredda Sieve & ZAZZ. Since Mr. Peterson did all the hard work of finding ZAZZ and uncovering a bit about Fredda Sieve, I figured I would concentrate on the easy task of bring ZAZZ back to life.  With the help of Tabletop Simulator on Steam, ZAZZ is now playable for free after nearly 60 years.

ZAZZ is a very simple game that uses all 5 of the standard polyhedral dice; d4, d6, d8, d12, d20.  A player rolls all five dice, and based on the faces shown, is awarded points. There is no decision making in ZAZZ, it is a pure luck game.  There is nothing wrong with a simple dice game, see our own LEFT OUT on TTS, but a look into the rules of ZAZZ uncovered several issues.

ZAZZ Scoring & The Unique Use Of The D4

Look at the ZAZZ d4.  It has only one number per side while a traditional d4 has 3 numbers per side.  The number shown on the bottom of all exposed sides is the rolled number.  ZAZZ does the complete opposite.

While the d6, d8, d12, and d20 die are traditionally read(the top face is the rolled number), ZAZZ uses all three exposed faces of the d4 towards the roll.  Thus on every roll of 5 dice, 7 numbers are rolled(3 from the d4, and 1 from each of the other dice).  I cannot think of another game that utilizes the d4 in this fashion so this d4 mechanic may be unique to ZAZZ.

Utilizing the seven numbers rolled to produce scores is as follows:

Then the rules go wonky.  The second part of the scoring equation is adding the value from the d20 IF the value is OVER 12.

The first issue with the rule as written is there is no distinction anywhere as to whether the value of the d20 is added ONLY if there is at least one pair or set OR it is always added even if there is no pair or set rolled.  Hold that thought for a moment as I explain the bonus scoring.

BLAST OFF is defined as – If a roll contains no pairs or sets AND the roll of the d20 is UNDER 12, it is a BLAST OFF.

The original ZAZZ rules state the game is played to 100 points.  I have simulated several games and the average roll score is between 20-25.  Thus an average game of ZAZZ would last 4 or 5 turns.  Even worse, a player could win immediately with a BLAST OFF, and any 3 or 4 of a kind scores a lot of points.  Even a fairly bad rolls of just a pair of 1s can turn into 15-20 points quite easily(35% chance of rolling 13 or higher on d20).

So the overall point total needed to win is too low.  This is compounded by the murky rule about whether rolls without pairs/sets but with d20 13 or higher are scored.  There is hardly ever a chance to score nothing in ZAZZ. Well except for that one specific roll, the rarest roll in ZAZZ, and that is the only roll in which zero points can be rolled.

5 of a kind needs a bonus value worthy of its rarity.   That bonus is now 75 points.

The amount points needed to win needed to be higher to account for the high average roll score.  250 points should take 10-12 rounds, a perfect amount for a multiplayer session.  If playing with only 2 or 3, you might want to raise the final total needed to win.

Raising the total needed to win allowed for the original scoring formula of ZAZZ to stay exactly how it was(minus the clearing up of the over/under 12 issue). Completely playable, ZAZZ is a fun little game that is entirely based on luck.  Winning and losing is pure chance.

To add a little spice to ZAZZ, the are now the option of a d10 ZAZZ die and ZAZZ Cards.   I wanted to make ZAZZ a more fun game to play but I didn’t want to take it out of the period in which it was made, 1963.  Games back then were very simple, so I didn’t want to burden the original ZAZZ design with any mechanic or component that wasn’t available in 1963.  I wanted any new ZAZZ twist to feel as if Fredda Sieve invented it 60 years ago.

I ended up having to compromise a tiny bit because the modern d10 was not invented until 1980(there were 10 faced dice way before then, but they were not regular polyhedrals or fair dice), but I thought the game that utilized the polyhedral set first deserved to add the last member of the family to the clan.  I am sure if it were available to her, Fredda Sieve would have at least considered adding the d10 to the game.

The added d10 has 3 sides marked with ZAZZ CARD and 7 sides marked as blanks.  Players roll the d10 in addition to the other 5 dice.  If ZAZZ CARD appears on the d10, players either must draw and/or play a ZAZZ Card.

There are only two types of ZAZZ Cards –

MUST roll – The player MUST re-roll the depicted die or the amount of dice stated.  There are no options.

There are 16 unique ZAZZ Cards and 3 of each card in the ZAZZ Deck(48 cards total).  Half are MAY roll, half are MUST roll.  If deciding to play the combative form of ZAZZ, players should remove the MAY roll cards and play only with MUST roll cards.  Both decks are available on TTS pre-sorted.

While the addition of the optional ZAZZ d10 and cards do not change ZAZZ into an intellectual battle, they do allow for player interaction and a bit of strategy.  There are several options for using the cards and the game can be played without them.  Players are free to make up their own rules, cards, and even dice to make ZAZZ a game of their own.

Whether you just want to try the original 1963 version of ZAZZ with all its quirks, or try the modern version that tries to smooth out a few ZAZZ bumps, I hope you enjoy getting a chance to play ZAZZ – The First Polyhedral Board Game.  Every nerd that ever rolled a d20 owns a tip of the cap and a hearty well done to Fredda Sieve, The Godmother of Polyhedral Dice.