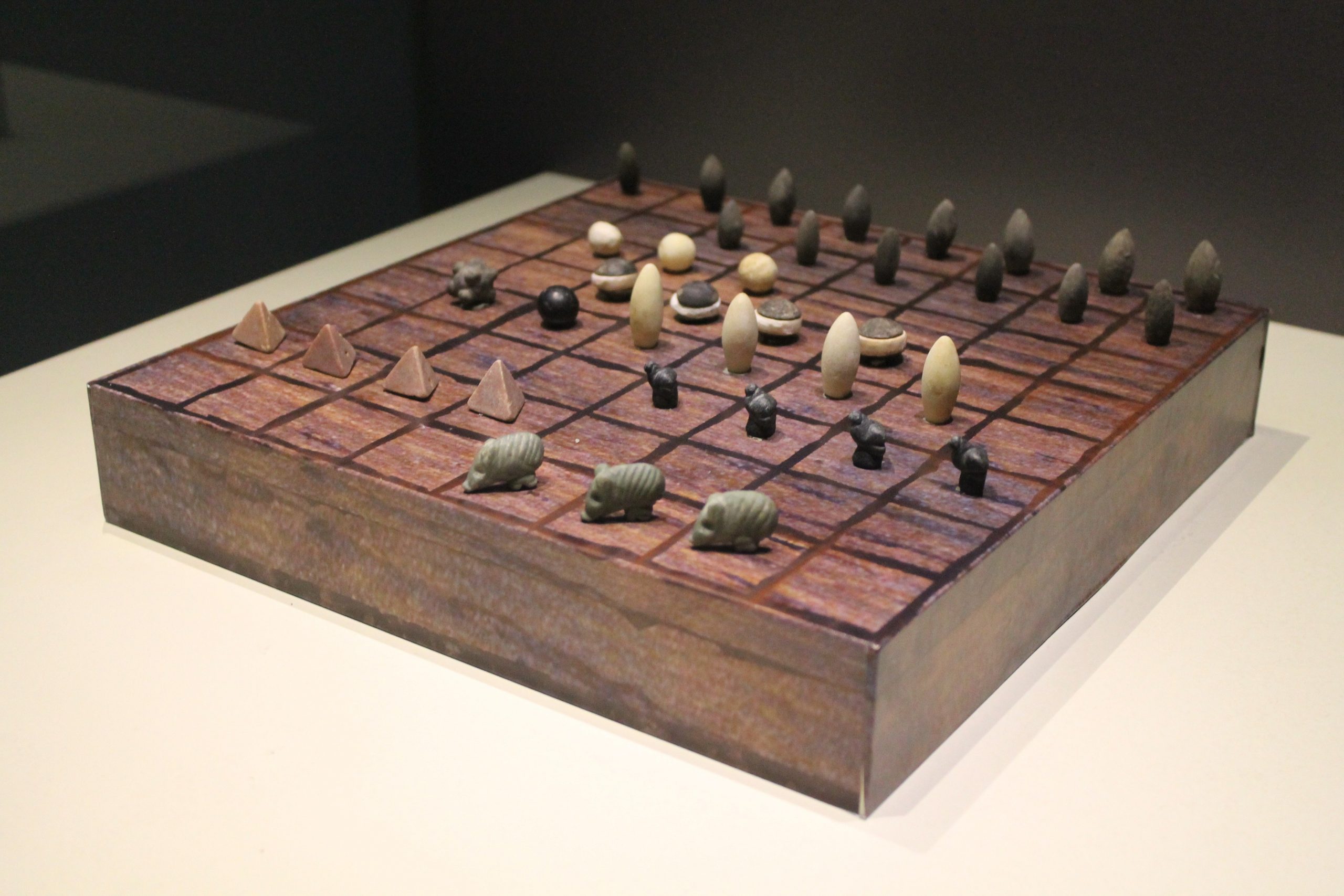 I woke up at 8 am today with a message from my friend saying, “Maybe You Can Solve It”  and a mysterious link to a Middle Eastern website.  It was time stamped 6:15 am.  It was a story about the discovery of game pieces 5000 years old.  The problem was there was no board and no rules.  It seemed like Mission Impossible.  But after a few cups of tea, I sat down at 9 am to solve the 5000 year old mystery.

Starting with just some game components and no board was a challenge.  The first thing I did was research on ancient board games from the Middle East.  What games would these people have known or played 5000 years ago?  Based on the region, I thought the most likely games known in that region at that time were The Royal Game of Ur and Senet.  They are very similar games but based on the components found, I thought it was likely the owner would have wanted a box to protect the pieces, so a Senet like box with a board on top seemed most likely.

I also made a few other assumptions:

Once it was decided that the Dogs & Pigs was a bastardized version of Senet sprung from an observation of the game being played, it was a matter of bending Senet or Ur into a game that resembled it but then wandered down its own path.  The Dog & Pig tokens were the obvious player tokens given the name of the game.  Hounds & Jackals was an Egyptian game so Dogs & Pigs could have been a rural version of the game seen in a city between wealthy merchants at a pub.

Labels are in reference to the game rules

Both Senet & Ur play on a board where a simple pattern is played by the players, but at some point they share part of the board and can get captured and sent back home.  First thing was making an adaptation of the Senet board.  This was done fairly faithfully minus a column of squares(Dogs & Pigs is on a 3 x 9 board and Senet on a 3 x 10 board).  This odd amount allowed for the first boulder to be placed in the center of the board.  It quickly followed that there are 2 more boulders just outside the player home areas.

The Dogs & Pigs Board Concept

The idea that the game involved betting accounted for the white and black stones.  These were the betting chips of the day.  Most likely a small bowl was next to the game and it held the wagers.

The big questions remaining were:

The big knobby die reminded me of a backgammon doubling cube.  That would fit right in if wagering were intrinsic to the game.  I simplified the cube so that it has a 1 instead of the 64, and the die is set at 1 to start a game.

Since there were no flat sticks or knuckle-bones found with the game, the mystery of how players moved is probably the trickiest part of the design.  However research again led me to the most likely solution.  Even though there are 4 pyramid tokens, they are not tokens.   They are dice!

One of the early forms of dice was to mark two corners of a pyramid(a 4-sided die) with dots.  Thus the dice would have a 50% chance of having a dot corner on top.  Basically if the dots were on top, it was a pip or yes.  By rolling 4 pyramid dice, the players could have 5 outcomes: 0, 1, 2, 3, or 4 dots up(on top).  This is how they moved their tokens.

Senet & Ur both involve the landing on an opponent and capturing it, sending it back home.  This mechanic was retained faithfully as it was probably seen enough to be interpreted correctly or seen in other games of the time.

That just left the grey and white stones.  Looking at the game boards at the time, there were very few squares compared to player tokens that needed to be moved about.  Ur has 20 squares and Senet 30 squares.  Both games speak about players having 7 tokens(although 5 is also mentioned).  Considering home squares, safe squares, and capturing, it’s likely games could get bogged down for quite a long time.  Thus perhaps they needed an alternative way of winning other than getting all your pieces into the opponent home area.

This ended up being the solution as to why there were the 14 grey stones and 4 larger white stones.  Each time you captured an opponent’s token, you got a grey stone.  Once you got to 8 stones(there are two sets of 7 small grey stones), you got a large white stone(representing 8 captures).  If you collected 2 white stones, you won by conquering or decimation, probably a very popular outcome in those days! I also thought that perhaps you got 2 grey stones per capture and 3 white stones was the decimation victory(this explains why 4 white stones…if you needed a 5th the game was over).

Once the game was designed, I went into Tabletop Simulator on Steam and created a very basic mock-up of the “board” along with all the components that would have been present. 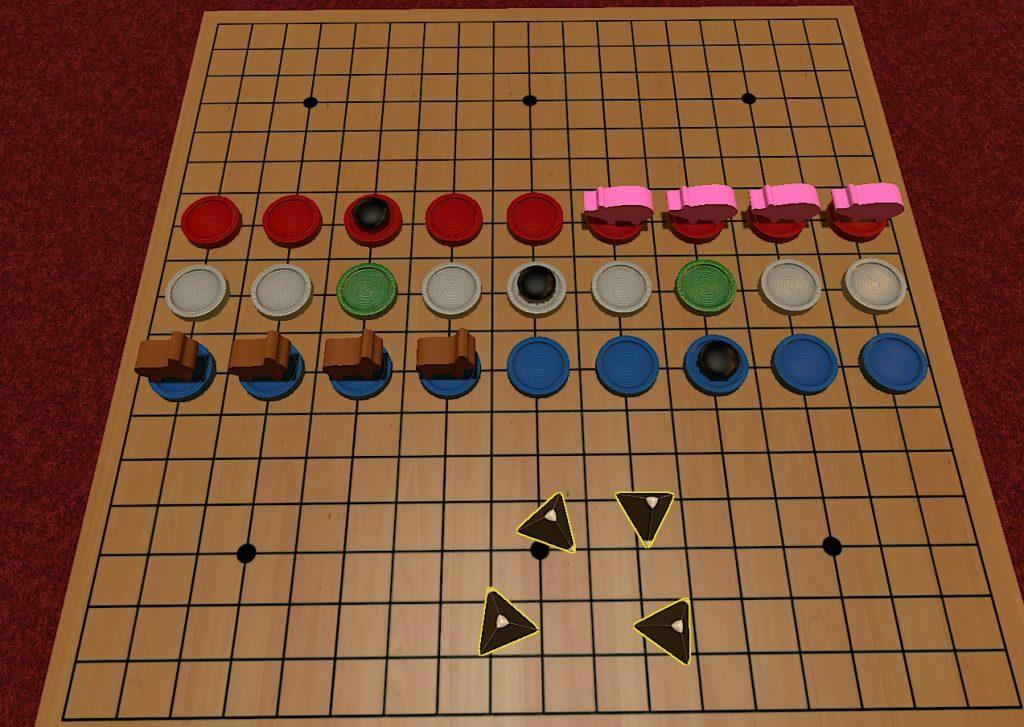 I have no idea if the game is any fun or properly balanced.  In keeping with the 5000 year old theme, simplicity and unbalanced, possibly even unfair, games were probably the norm when only 5 men in the city knew how to count or write.  The constricting nature of the small boards of the time is what led to thinking they may have needed an alternative way to win other than slugging it out for hours on a tiny board with too many tokens

It’s now just past 3pm.  Six hours after sitting down and looking at the 5000 year old game components for the first time, the pieces now have a reason to live again.  The game I designed may not be a good representation of whatever the game really was, or, in fact, a good game at all.  My main hope is that the effort to design a game based on mysterious components inspires others, and more versions of Dogs & Pigs are created.  When they are, I look forward to playing those versions as well.