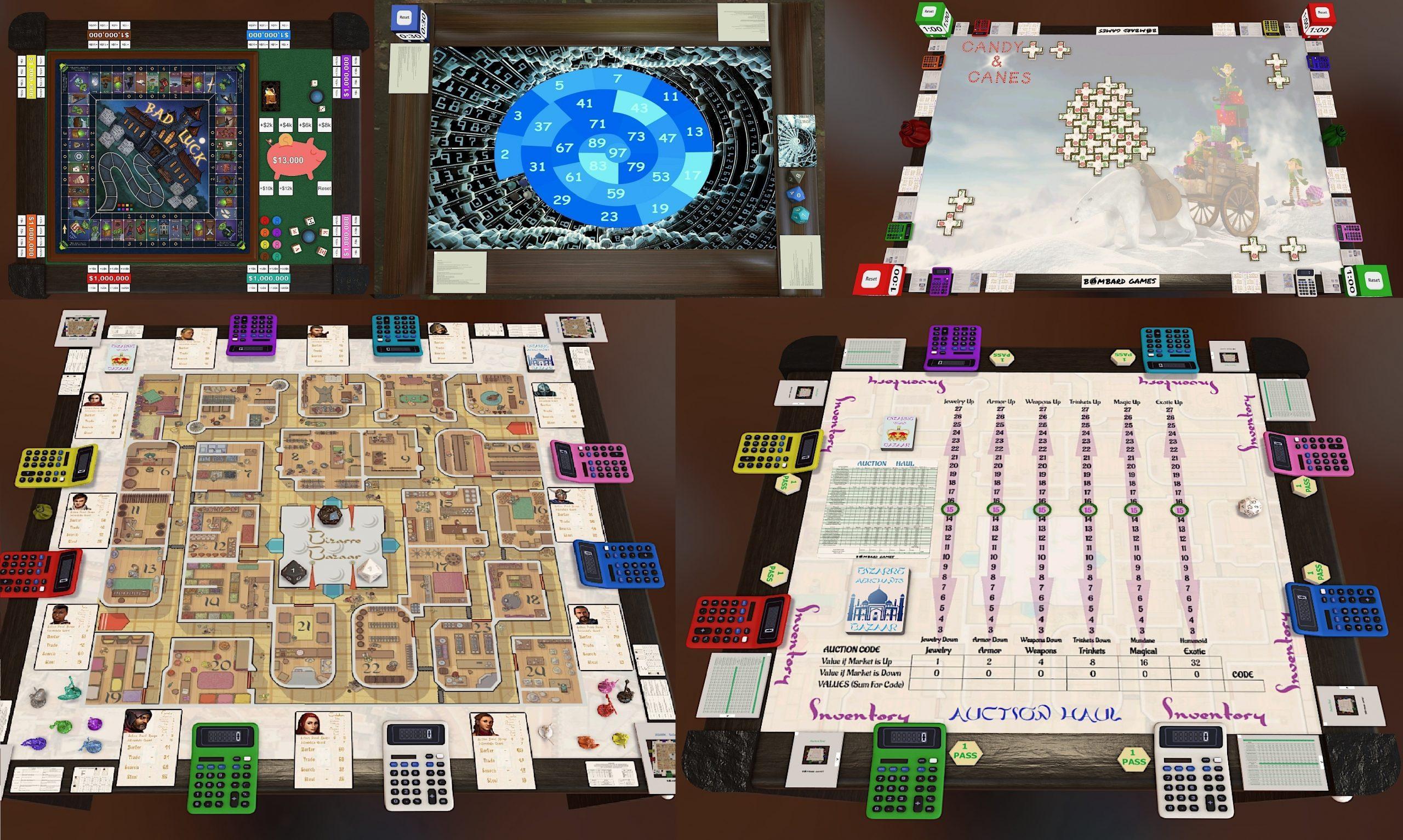 The holiday season is going to be a busy season for new board games.  And we have 5 new games coming in the next few months.  Below you will find a quick preview of each new game and a link to more information.  All of our board games are free to play on Tabletop Simulator.  Just download the games from our Tabletop Simulator workshop.  Look for these new games in the coming weeks!

Auction Adventure is comprised of two stand alone and interconnected board games:  Auction Haul & Bizarre Bazaar.  Both games can be played individually, or there is the option to connect the two games!  Players would first enter the Bizarre Bazaar in search of items to sell at the local Auction Haul, and then attend the auction to bid for what was found.  So whatever transpires in the Bizarre Bazaar directly affects the items for sale at the Auction Haul.

Auction Haul is one of the two games that comprise Auction Adventure.  Auction attendees will bid for rare treasures that will be sold at the year end Grand Auction.  Before, during, and after the auction, attendees exchange gossip about which merchants are attending the Grand Auction in an attempt to influence the markets, and thereby the prices, of items they own.

Bizarre Bazaar is one of the two games that comprise Auction Adventure.  In Bizarre Bazaar, adventurers scour a market looking to barter, trade, find, and steal wonderous objects and treasure to be sold at the local Auction Haul.  The Bizarre Bazaar is set up by random lot each day, so adventurers never know where items will be located or which merchants will be running each shop.

Adventurers can not only interact with merchants, but also with other adventurers.  The only thing more fun then talking or tricking a merchant into a profitable deal is doing the same thing to a friend or foe!  It’s every adventurer for themselves as they race to gather the items needed and get them to the Auction Haul first!

Bad Luck is a board game is which the unluckiest person wins. Players have been invited to a deceased
relative’s now vacant home for the reading of the will. The will states that each player will be given
$1,000,000 and tasked with losing it all . Players are given one year to lose the money, with each
side of the board representing one week. Thus one circuit of the board is four weeks, and 13 circuits
of the board in one year.

Along the way, players will hope to break mirrors, spill salt, lose at casinos, and avoid being
JINXed. And while players may never trade money in any way, they do have the power to play
some nasty Pandora cards on players, while sprinkling a little bad luck on themselves.
Let he or she who is the biggest loser win!

Candy & Canes uses polyomino pieces to create fun and festive holiday patterns sprinkled with candies and canes.  With a variety of ways to play and a unique public/private hand mechanic, Candy & Canes challenges players to build Candy Chains on the board that are worth a variety of points.

Use Polyomino pieces that interlock to create Candy Chains.  The longer the chain the more its worth.

Special Power Cards give players the opportunity to change the values of dice, gain more time, get extra turns and more.  Primal Urge can support up to 8 players allowing for head to head battles, and multi-player mayhem.